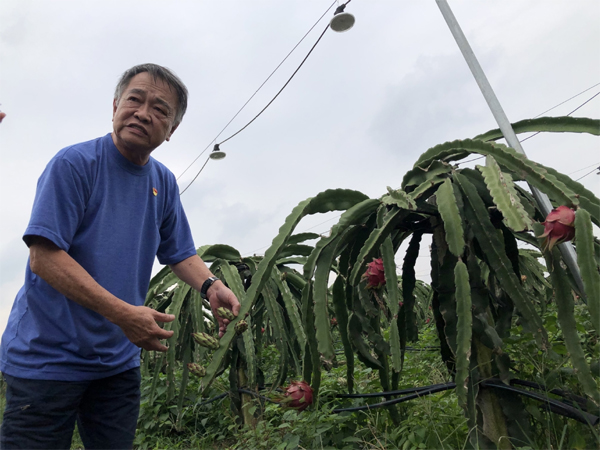 Liew Anh Luk, who came to China in 2002 from his home country Malaysia, answers visitor queries on pitaya at his plantation in Zhanjiang, Guangdong province, in November. [Photo by Qiu Quanlin/China Daily]

After four decades of working as a farmer, Liew Anh Luk, 70, came to China in 2002 from his home country Malaysia and continued his pursuit of a personal vision－to plant pitaya, or dragon fruit.

"My interest in planting pitaya was based on my wife's habit－she loves eating the fruit. But I could not find a place in Malaysia with rich soil for planting the fruit," Liew said.

A small strip of land in China was found to be best suited for cultivation of pitaya. So, Liew came to South China 18 years ago, to plant red pitaya in Qinzhou, the Guangxi Zhuang autonomous region, which has the right temperature and humidity for cultivation.

After several years of planting, Liew set for himself an ambitious goal－to enter the agro-processing sector to make pitayabased products. "People's knowledge of pitaya is limited," he said.

So, in 2015, Liew went to Suixi county in Zhanjiang, a coastal city in neighboring Guangdong province, to set up his agro-processing business.

"I visited a maar volcanic lake in Zhanjiang, which was formed 140,000 to 160,000 years ago after a volcanic eruption. The geology here has rich soil for planting pitaya," Liew said.

In the exhibition hall of Meichen Bio-Technology, vinegar, wine, juices and cosmetics, which are made of dragon fruit, attract visitors' attention. "Only through agro-processing can agriculture be developed in a sustainable way," Liew said.

The company's sales reached more than 30 million yuan ($4.56 million) last year, after over 10 varieties of products made of dragon fruit were promoted to the market.

"We have plans to promote more than 30 varieties of products to the market," said Liew.

The company's business was affected in the first half of this year due to the COVID-19 pandemic, but sales have grown moderately since August, Liew said.

His business of making pitaya-based products went well beyond his wife's habits－and has helped change the traditional way of planting the fruit.

"The company has dual goals－to promote the dragon fruit and to help local farmers make more money. We are teaming up with the local government to help farmers earn more," said Liew.

Suixi county, on the Leizhou Peninsula, faces Hainan province in the south, and has a population of 1.09 million. Most are farmers. According to Li Qiang, director of Suixi county's agricultural bureau, the farming land of pitaya has increased from 2,000 hectares in 2016 to more than 6,000 hectares last year since the establishment of Liew's company.

"The increase in farming land was mainly due to the agro-processing of dragon fruit over the past few years. Most of the fruit grown locally is made into fermented products or beverage products," said Li.

In the past, farmers' incomes depended mainly on planting and selling the fruit, according to Li.

"With the advent of Liew's company, farmers are willing to plant more dragon fruit and, eventually, they will likely make more money," said Li.

As part of a new cooperative, local farmers have been selling their dragon fruit to Meichen Bio-Technology since 2016. They receive a relatively high price. "Farmers no longer hesitate to plant more fruit without worrying about sales," said Li.

Zhou Chengfu, 67, a farmer of Naixian village, Suixi, has plans to build a new house after three years of working as a technician at a planting base of Meichen Bio-Technology. He earns a monthly salary of more than 3,000 yuan.

"My family also plants dragon fruit on a land of about 0.3 hectare, which could help me earn about an additional 20,000 yuan a year," said Zhou.