Lianjiang, a county-level city in Guangdong province, has been paired with Rongshui Miao autonomous county in Guangxi Zhuang autonomous region since 2017 to assist the county in its poverty alleviation efforts.

Rongshui is one of the 20 severely impoverished counties in Guangxi. The county boasts rich forest resources, with its forested area reaching 338,200 hectares and a forest coverage rate of 81 percent. The annual production of cedar wood in the county is 400,000 cubic meters, ranking second in the country.

The two sides decided to jointly build a poverty alleviation industrial park in Rongshui based on the rich forest resources in Rongshui, the advanced management and investment attraction experience of Lianjiang, as well as a number of preferential policies in factory rentals, taxes, and financing. 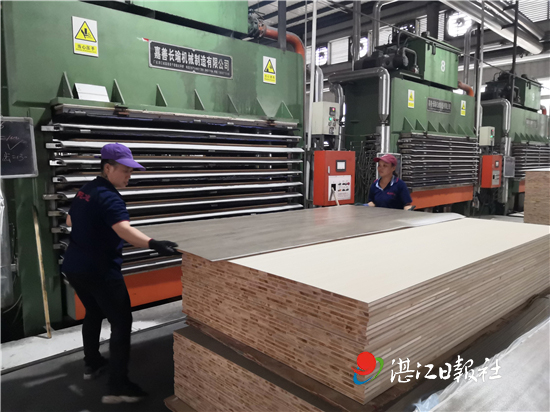 Construction of the poverty alleviation industrial park is in progress, with 80,000-square-meter standard workshops and supporting facilities having finished construction. Four factories that have a construction area of 20,000 sq m are currently under construction and are expected to be put into use by the end of October.

The national top three ecological board manufacturers and other enterprises from the eastern part of the country have settled in Rongshui, with a total investment of 320 million yuan ($47.60 million).

To date, the county has received 842,000 yuan in factory rent, which has been allocated to the collective accounts of 115 impoverished villages and two relocated communities in Rongshui.

After the whole industrial park is completed, it is expected that a total of 45 enterprises will settle in it, providing more than 10,000 jobs and boasting a total industrial output value of 7 billion yuan, with about 1.6 million yuan in factory rent expected to be generated per year.