Wuchuan, a county-level city in Zhanjiang, has invested 2.3 billion yuan ($329.76 million) in the relocation of three county-level public hospitals since 2017, aiming to enhance the capacity of primary-level medical and health services in the city. 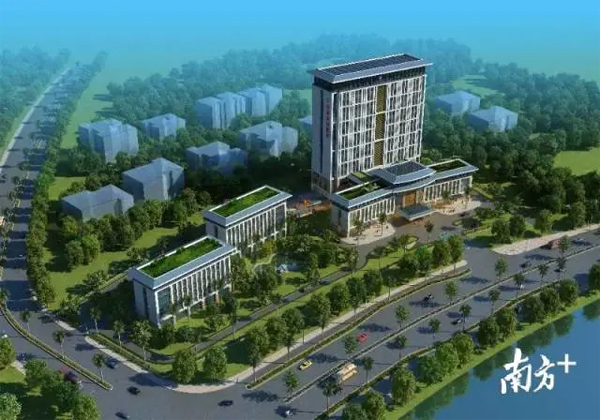 The design sketch for the relocation of the Wuchuan Hospital of Traditional Chinese Medicine. [Photo/Nanfang Plus]

The People's Hospital of Wuchuan currently covers an area of less than 36 mu (2.4 hectares), with only 1,100 beds and difficulties for finding a place to park, said Wang Qi, director of the hospital.

Independent infectious buildings were planned in the construction of the three hospitals, along with intensive care units (ICUs), negative pressure beds, and relevant inspection equipment, with the aim of improving the city's capacity for epidemic prevention and control.

In addition, Wuchuan is constructing fever clinics at its 17 township health centers and community health service centers, which are expected to be finished by the end of 2022.

The city is also planning to build a stadium with public health emergency functions, which can be quickly converted into a makeshift hospital that can provide 600 beds.

"It is particularly important to strengthen the construction of public medical and health institutions to do well in public health, especially in the prevention and treatment of major epidemic diseases," said Wen Guanshou, deputy director of the health bureau of Zhanjiang.