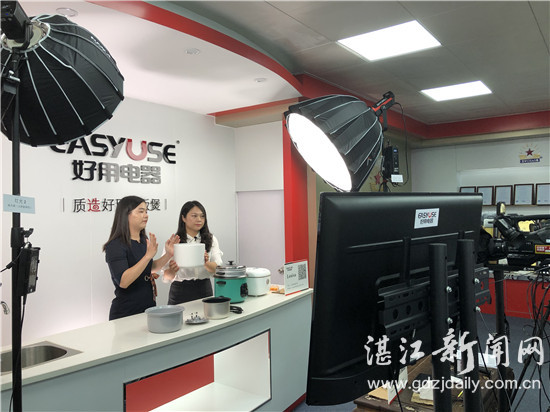 The 127th session of the China Import and Export Fair, popularly known as Canton Fair, started its first online version on June 24 due to the worldwide COVID-19 pandemic.

In this online trade fair, which lasts until June 24, there are 64 Zhanjiang-based companies that are participating in it. As of June 22, they have held 511 live stream shows, achieving deals worth almost $50 million and making great progress in this first online Canton Fair.

Ou Xianwei, vice mayor of Zhanjiang, led a research group to visit a household appliances company on June 23 to further learn about its participation in the online fair.

As they arrived, the live stream hosts were promoting products in English, with several staff members coordinating with them. The company's salespeople were negotiating with enterprises all over the world that were attracted to their products, with every procedure happening in an orderly manner.

According to the head of the company, they have also confronted many challenges for the first time at the fair, such as unstable internet connection and lack of real-time communication with clients.

Under these new circumstances, related government departments should support companies in terms of their business transformation and upgrading, while the enterprises themselves should work together, strengthen domestic communications, as well as equip themselves with new technologies, professional personnel, and high-quality services, the research group concluded.