Reconstruction of Provincial Highway S286 on Nansan Island in Potou district, Zhanjiang started on June 22 to bring more convenience for people on the island.

Nansan Island is located in the southeastern part of Zhanjiang and covers an area of 123.4 square meters. Currently, it only has a two-way two-lane road that connects the island to the outside, which has restricted the development of the island.

The reconstruction project was approved in March 2017 and covers the section from Beiya village to Nansan Forest Farm of the highway, totaling a length of more than 16.79 kilometers.

It is planned to build a two-way four-lane road, with a designed speed of 80 km per hour. The total investment in the reconstruction project is 844 million yuan ($119.27 million).

After completion, the highway will run from west to east through the island and link the Haidong Express, Nansan Island Bridge of the Zhanjiang Beltway, which is under construction, and the key development area for coastal tourism on the island. It will bring new opportunities and impetus to the development of the island.

In the past two years, Potou district has invested about 120 million yuan in hardening 130 km in roads in its rural areas, as well as for upgrading and reconstructing nearly 18 km in roads. It also completed the greening and beautification of 100 km in rural main roads.

The district plans to upgrade and reconstruct 30 km in roads in rural areas this year. 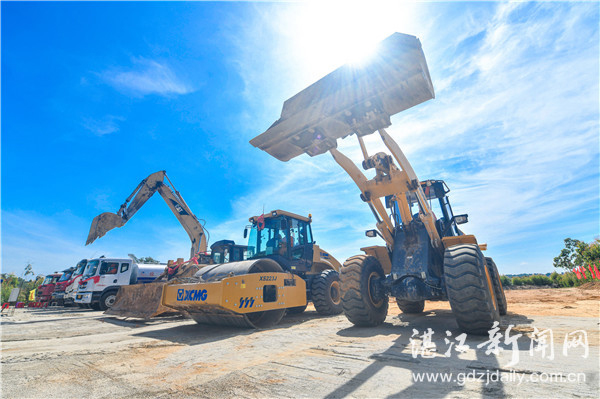 The groundbreaking ceremony for the reconstruction project of Provincial Highway S286 is held at Beiya village in Potou district, Zhanjiang on June 22. [Photo by Lang Shuchen/gdzjdaily.com.cn]