A publicity campaign was launched by the Zhanjiang municipal ecology and environment bureau on June 17 to mark National Low Carbon Day and to advocate green, low-carbon and environment-friendly lifestyles to people.

Low-carbon lifestyle-themed picture exhibitions and award-winning quizzes were carried out around the city, along with the distribution of brochures.

"Wearing clothes made by environment-friendly materials, saving water and electricity, using fewer disposable chopsticks, riding bicycles, walking and travelling by bus are all low-carbon behaviors," said the person in charge of the Zhanjiang municipal ecology and environment bureau, adding that low-carbon life is a popular living habit and also a requirement of building Zhanjiang into a national civilized city.

The composite index of the ambient air quality of the city in 2019 ranked third in Guangdong province, and the average particulate matter less than 2.5 microns in diameter (PM2.5) concentration was 26 micrograms per cubic meter, the best level in recent years.

Zhanjiang also topped the province in terms of the composite index of the ambient air quality from January to April. 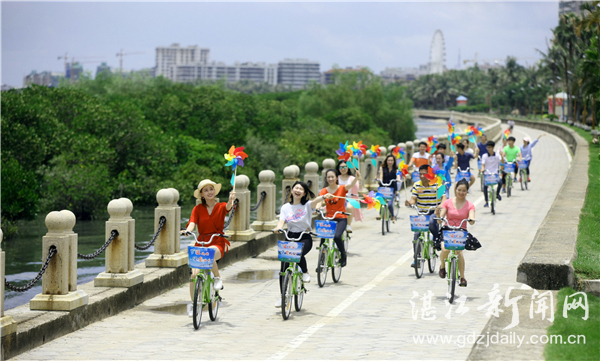 Riding bicycles is one of the green and low-carbon behaviors being encouraged. [Photo by Li Zhong/gdzjdaily.com.cn]