Shangyanshan village is located in the southwestern part of Jishui town in Lianjiang, a county-level city in Zhanjiang. It has a history of more than 500 years and boasts a profound revolutionary culture.

The Lianjiang County Committee of the Communist Party of China was set up at the Ancestral Hall of the Li Family in Shangyanshan village in 1927, and was also one of the main revolutionary bases during the War of Resistance against Japanese Aggression (1931-1945) and the War of Liberation (1945-1949).

In 1990, the village was recognized as a revolutionary base village by the Lianjiang government, and later a red education base was established on the site. 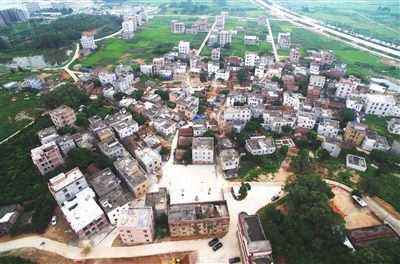 A breathtaking panorama of Shangyanshan village in Lianjiang, a county-level city in Zhanjiang. [Photo by Li Zhong/Zhanjiang Daily]

Shangyanshan village is also one of the earliest villages in Lianjiang to promote the construction of a new rural area. It got access to electricity in 1979, telephones in 1990, tap water in 2011, and the internet in 2013. All the main roads of the village were hardened by cement in 2005.

The village currently boasts an excellent living environment, as well as picturesque scenery. It is a good place to escape from the hustle and bustle of cities to enjoy extreme relaxation.