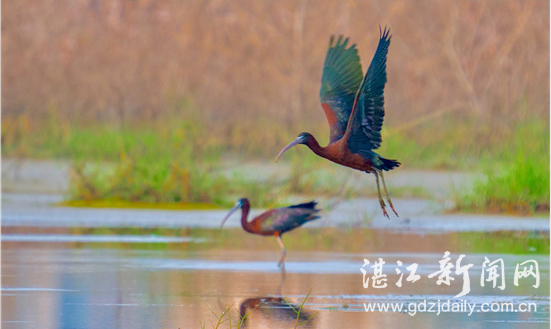 Two glossy ibises, which are under second-class State protection in China, were recently seen and photographed in Zhanjiang. In January 2005, this kind of bird was observed for the first time in the city.

The glossy ibis, a close relative to the endangered crested ibis, has very small populations. In the last century, no record of this wild bird was observed for more than 70 years, and as a result the China Red Data Book of Endangered Animals had earlier announced the extinction of the glossy ibis.

According to the Zhanjiang Bird Caring Association, that 34 critically endangered spoon-billed sandpipers were observed in the city in March and a group of wild Chinese egrets were seen in May for the first time shows the superiority and uniqueness of the city's ecological environment.

Zhanjiang topped Guangdong province in terms of the composite index of ambient air quality from January to April.