Hengshan town in Lianjiang, a county-level city in Zhanjiang, boasts a time-honored pottery-making tradition that is regaining popularity. Pottery has been one of the town's characteristic and traditional industries.

The history of pottery making in Lianjiang can be traced back to the Tang Dynasty (618-907), and people in Hengshan started setting up pottery kilns during the reign of Emperor Kangxi of the Qing Dynasty (1644-1911). Hengshan had more than 30 kilns in its heyday.

In the 1950s, pottery for daily use made by kilns in Hengshan was well received by people all over the country. However, the traditional hand-made pottery faded out of popularity due to the impact of modern mass production. 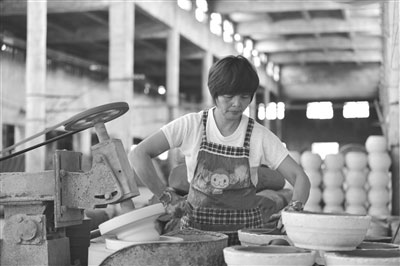 A worker of Hengshan Kiln makes greenware with the help of machines. [Photo/Zhanjiang Daily]

As people become more interested in a healthy lifestyle and traditional crafts, fine pottery for daily use has regained popularity.

With the development of technology, part of the pottery making process is now semi-mechanized, such as pudding and shaping. However, other steps still maintain the traditional methods.

"We are keeping pace with the times, and have started to employ university graduates majoring in ceramics as technicians," said Chen Guangcheng, who majored in machinery and took over pottery making from his father after graduation. "We should realize innovative development in the inheritance."

The current Hengshan Kiln is renowned around Lianjiang. Pottery like ceramic pipes, water vats, clay pots, and chopsticks boxes can be seen everywhere at the kiln. Even some of the houses and walls are made of discarded pottery. The kiln is an epitome of hundreds of years of Hengshan's pottery history and prosperity.