The General Office of the State Council announced 30 incentive measures on May 8 for the list of 213 areas in China that have achieved outstanding outcomes in implementing national major policies last year.

Suixi county of Zhanjiang was included on the list for the first time for its achievements in modernizing the distribution of agricultural products and promoting the development of rural e-commerce.

Special funds and priority support will be given to the county by the Ministry of Commerce and the Ministry of Finance in 2020 for the county's comprehensive demonstration work of e-commerce in its rural areas.

To date, there were more than 20 logistics and express enterprises in the county, setting up a logistics network that links the county center and its rural areas.

Scientific training programs have been developed by Suixi to cultivate more e-commerce talents. The number of e-commerce employees in the county has grown from a few hundred to more than 5,800.

Suixi has also emphasized developing e-commerce agricultural products brands, the number of which has increased from 14 in 2015 to 40 in 2019.

The integration of the agricultural industry and e-commerce has promoted large-scale industrial planting in the county. To date, the plantation areas of sugarcane, sweet potatoes, and dragon fruit have reached 500,000 mu (33,333 hectares), 200,000 mu, and 100,000 mu respectively.

In addition, Suixi has been active in exploring poverty alleviation through e-commerce. Development models integrating e-commerce, bases, and impoverished households were developed to expand employment and encourage entrepreneurship of impoverished people in the county. 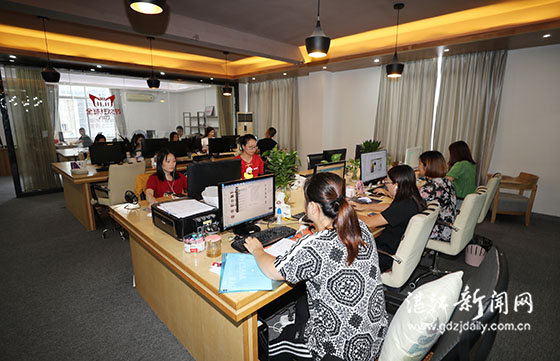 Employees receive orders from the online shop on Taobao on their computers in the e-commerce industrial park in Suixi county, Zhanjiang. [Photo by Li Zhong/gdzjdaily.com.cn]