In 2019, Zhanjiang's investment in transportation construction reached 18.99 billion yuan ($2.74 billion), a year-on-year increase of 13.9 percent, helping it evolve from a city where traffic was extremely inconvenient to a national transport hub.

The city has completed a total of 184.36 kilometers of road reconstruction. Zhanjiang Airport opened 11 new routes and reached 38 cities in China and abroad, with passenger flow exceeding 3 million, an increase of 17 percent. The airport was also approved to open to foreign national aircrafts, and two new international routes were added. In addition, Zhanjiang Port was upgraded, opened five routes, and operated two special sea-rail transportation lines. 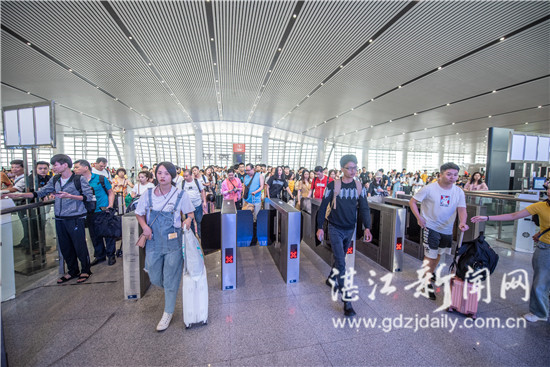 With the railway hub development plan approved in July 2019, Zhanjiang was enabled to build itself into a national comprehensive transportation hub with legal support, which will greatly enhance urban development and accelerate construction of a provincial sub-center city.

The relocation project of Zhanjiang Airport started in October 2019 to speed up the construction of a modern coastal economic belt. With an investment of 5.43 billion yuan, the new airport will build a new runway, a parallel taxiway, 30 parking spaces, and a 61,800 square meters terminal. After completion, the airport will have the capability to have direct flights to Europe and the US, becoming the core of an integrated transportation hub in western Guangdong province.

The airport area within 10 kilometers of the new airport will form an aviation industrial cluster allocated with industrial resources spanning business, tourism, e-commerce, and high technology.