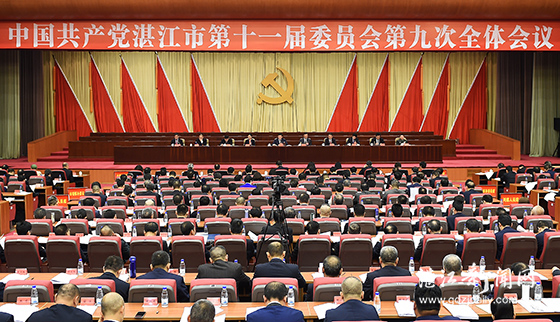 The 9th Plenary Session of the 11th Zhanjiang Municipal Committee of the CPC is held at Zhanjiang International Convention Center on Jan 7. [Photo/gdzjdaily.com.cn]

The 11th Zhanjiang Municipal Committee of the CPC held the 9th plenary session at Zhanjiang International Convention Center on Jan 7, reviewing work achievements in 2019, as well as deploying future plans for 2020 and beyond.

Zheng Renhao, Party secretary of Zhanjiang, made a work report on behalf of the Standing Committee of the Zhanjiang Municipal Committee of the CPC, while Mayor Jiang Jianjun made specific arrangements for the economic work.

The session noted that in the past year, Zhanjiang's economic development has progressed steadily and the overall social situation was harmonious and stable. It has laid a good foundation for accelerating the construction of elevating Zhanjiang into a sub-center city of Guangdong province and building a modern coastal economic belt.

The city has made fruitful results in the construction of transportation infrastructure and a modern industrial system. It has also deeply implemented the innovation-driven development strategy, coordinated co-construction, governance, and sharing, as well as promoted people's living standards.

The year 2020 is going to be extremely significant for China as the nation will complete the building of a moderately prosperous society in all aspects, which is China's first centennial goal, as well as secure a decisive victory in the battle against poverty.

In addition, poverty relief, effective prevention and control of financial risks, as well as environmental protection have been identified as key tasks for 2020 that should be carried out, and that measures shall be taken to improve people's livelihoods.