In recent years and especially since last year, Zhanjiang has developed rapidly in the fields of industry, transportation, and people's livelihood, bolstered by the importance placed on the city and the support it has received from the central government and Guangdong government.

As a prefecture-level city, Zhanjiang has signed the Framework Agreement on Cooperatively Building the Western New International Land-Sea Trade Corridor with 13 provinces, autonomous regions, and municipalities.

The integration of Zhanjiang to the Guangdong-Hong Kong-Macao Greater Bay Area and Shenzhen,  a pilot demonstration area of socialism with Chinese characteristics, has brought strong momentum and great opportunities to the city's reform and development. Donghai Island of Zhanjiang has introduced three major projects with investment or output value exceeding $10 billion, including the Baosteel Zhanjiang Base project, the China-Kuwait Integrated Refining project, and the BASF (Guangdong) Integrated Base project. 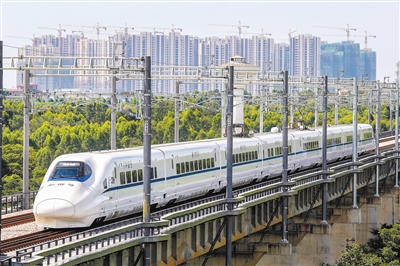 A high-speed train traveling from Guangzhou South Station to Zhanjiang West Station is about to reach the terminus. [Photo by Zhang Fengfeng and Lang Shuchen/Zhanjiang Daily]

After completion, Zhanjiang will strengthen its links with the core cities of the Pearl River Delta and the Greater Bay Area, reducing travel time between Zhanjiang and cities in the Pearl River Delta like Guangzhou and Shenzhen to less than two hours. It will closely connect with Beibu Gulf city clusters and the Hainan Pilot Free Trade Zone (Port), as well as strengthen connections between the inland and hinterland cities and coastal cities.