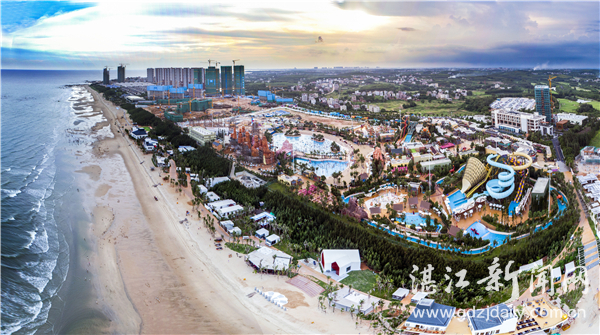 Dinglong Bay Scenic Spot in Zhanjiang has been a successful example of the growing coastal tourism industry. [Photo by Zhang Fengfeng/gdzjdaily.com.cn]

In the first three quarters of this year, Zhanjiang achieved tourism revenue of 44.1 billion yuan ($6.27 billion), an increase of 18 percent, and received 43.35 million visitors, an increase of 15.9 percent.

Since last year, the addition of trains at Zhanjiang West High-speed Railway Station, as well as the increased routes and flights at Zhanjiang Airport have boosted the domestic and overseas tourism market, bringing a growing number of tourists to the city.

Since this year, Zhanjiang has also become a hot spot for investment in tourism projects. More than 10 well-known domestic tourism groups came to Zhanjiang for project inspections and negotiations. In addition, with the official opening of popular attractions like Confucius Cultural City and Dinglong Bay Scenic Spot, Zhanjiang is becoming an ideal destination for more and more domestic and foreign tourists.