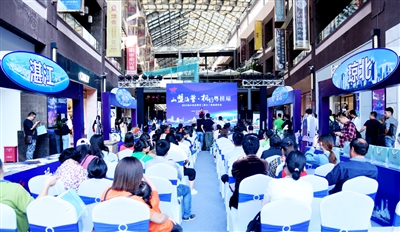 Cities in northern Hainan province, Zhanjiang in Guangdong province, and Liuzhou in Guangxi Zhuang autonomous region launched a tourism promotion meeting in Haikou, capital city of Hainan, on Nov 23 to explore ways to open up the tourist market of the Beibu Gulf urban agglomeration.

The meeting was co-hosted by the bureaus of tourism, culture, radio, film and sports of Zhanjiang, Haikou, and Liuzhou. Tourism information introductions, an ethnic customs show, interaction activities, as well as promotional brochures distribution were carried out on site.

On May 9, 2018, the governments of Guangdong province, Hainan province, and Guangxi Zhuang autonomous region reached an agreement in Haikou, which proposed that the three places jointly create high-quality tourism routes, strengthen tourism market cooperation, promote the mutual delivery of tourists, and work together to build a world-class vacation destination.

Zhanjiang is a prefecture-level city with the longest coastline, the most islands, and the most renowned seafood in Guangdong province. As the hubs for the cooperation between Hainan and Guangdong, Haikou and Zhanjiang play an important role in the construction of the Qiongzhou Strait Economic Belt. In recent years, Haikou and Zhanjiang have accelerated their efforts to promote the Qiongzhou Strait to become a development channel between the two places in transportation, ports and shipping, as well as tourism. They have launched more tourism products and accelerated the exchange of tourists between the two places.

A leader from the Haikou Association of Travel Services said that Haikou will design and launch new tourist routes with multiple stops, as most tourists from Guangdong and Guangxi traveling to Hainan prefer self-driving trips.

The three places will strive to promote the integration and development of tourism, as well as expand the influence and attractiveness of regional tourism.