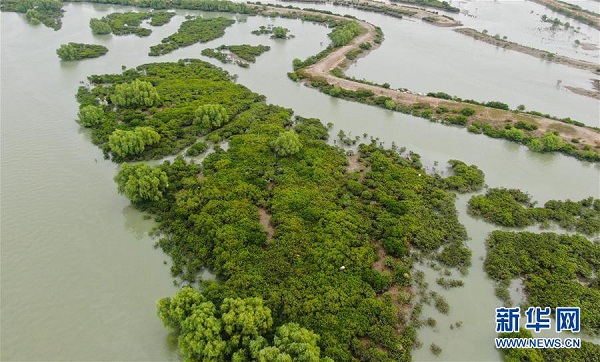 Remarkable results in protecting mangroves have been achieved in South China's Guangdong province, as many measures were taken to restore mangrove wetland resources and the ecosystem of the Zhanjiang Mangrove National Nature Reserve, the largest mangrove nature reserve in the country.

Zhanjiang Mangrove National Nature Reserve was established in 1990 and was upgraded to a national nature reserve by the State Council in 1997. The reserve is divided into 37 protected communities with a total area of 20,278.8 hectares, including 7,228 hectares of the mangrove forest area, accounting for 33 percent of the total mangrove area in the country.

Lyu Rong, deputy director of the Zhanjiang Mangrove National Nature Reserve Administration, noted that Zhanjiang has made special plans to complete dredging of more than 4,800 hectares of aquaculture ponds in the reserve within three years from 2018. To date, 410.5 hectares of ponds in the core area have been cleared.

A range of conservation initiatives have enriched the biodiversity of the reserve, as 305 species of birds and 139 species of fish were recorded. In addition, the mangroves also help to prevent wind, waves, and disasters.

"We should integrate mangroves as part of a marine ecosystem to promote sustainable development. This is the direction of our future efforts," added Lyu.