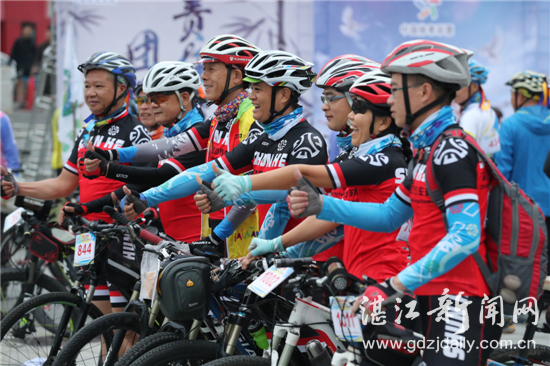 The 6th cycling activity around Leizhou Peninsula will be held by Zhanjiang municipal people's government on Nov 17.

As one of the top 10 key sports brand events in Guangdong province, the 200-kilometer cycling event has become the most influential cycling activity in Zhanjiang and the whole province, attracting thousands of cycling enthusiasts to take part every year.

The routes of this year's cycling activity will involve Chikan district, Potou district, Wuchuan, Lianjiang, Suixi county, and Mazhang district. The starting and ending points are both set up at Zhanjiang Sports Center Square. Urban landscapes, coastlines, historical buildings, and rural scenery are incorporated along the routes, allowing participants to enjoy the natural scenery, marine resources, and cultural landscape of the Leizhou Peninsula.

The cycling route spans 200 kilometers and lasts about 13 hours. As of Nov 7, more than 1,500 people from 13 provinces and cities across the country have signed up to participate in the event.

The event will strengthen exchanges between Zhanjiang and other provinces and cities in the Beibu Gulf area, showcase the new image of Zhanjiang's economic construction, as well as enhance the visibility and influence of the city.