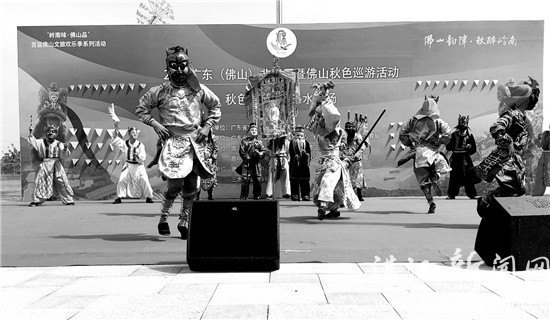 A Zhanjiang Nuo dance group was invited to perform in the parade and stage shows of the 2019 Guangdong (Foshan) Cultural Heritage Week and the Foshan Qiuse Parade, which were held in Chancheng district, Foshan from Oct 31 to Nov 4.

The Foshan Qiuse Parade is a traditional folklore activity and a national intangible cultural heritage with a history of more than 600 years. Being held once a year in the autumn since 2009, it has become an important platform to showcase Lingnan culture and spread the cultural image of Foshan. The event has been held in conjunction with the Guangdong (Foshan) Cultural Heritage Week since 2016.

The Nuo dance, known as a "living fossil of dance," is an ancient mask dance, integrating elements of martial arts and music, as well as carvings. It is listed as a national intangible cultural heritage.

The Zhanjiang Nuo dance group was composed of 30 actors from Mazhang, Leizhou, and Wuchuan of Zhanjiang. In addition to taking part in the parade, the group also had a stage performance at a branch venue in Sanshui district, Foshan.