Concrete pouring on the bridge piers of Donghai Island Grand Bridge on the Yulin-Zhanjiang Expressway has finished on Sept 9.

Spanning 196 kilometers, the Yulin-Zhanjiang Expressway is a major transportation channel that links cities within the Beibu Gulf.

Located at the end of the expressway, the 4.38-kilometer Donghai Island Grand Bridge, which possesses 302 bridge piers, is designed to be a two-way four-lane highway with a design speed of 100 km per hour.

It is expected that the construction of the pier stud, bent cap and girder erection will be completed by the end of September, and that the bridge will be joined up by then. 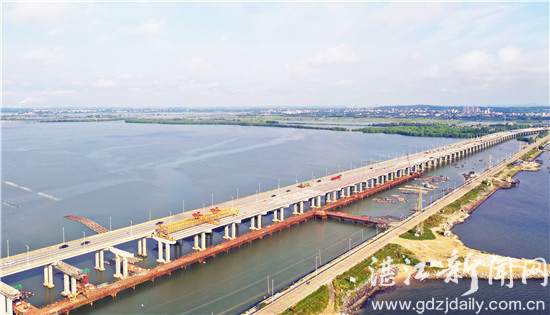 The concrete pouring of the bridge piers of Donghai Island Grand Bridge in Yulin-Zhanjiang Expressway is completed on Sept 9. [Photo/gdzjdaily.com.cn]