A bird's view of Leizhou. [Photo/gdzjdaily.com.cn]

Wanhua will build a green home industrial park in Leizhou and the overall plan of the project will be completed in eight phases. It is estimated to have a total investment of 14 billion yuan ($2.04 billion) and an annual total output value of 15.3 billion yuan. The project will further promote the economic development of Leizhou, as well as promote the development of the city's green manufacturing industry.

Leizhou has unique natural conditions and abundant resources. It is an important forestry production base in Guangdong province with its output of straw reaching 1.1 million tons per year. Wanhua is currently the largest straw ecological board production supplier in the world, and is a corporate group integrating production, learning, and research in the country. 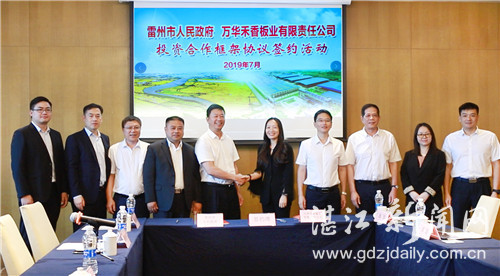 Li Xiongguang, Party secretary of Leizhou, said at the signing ceremony that he hopes Wanhua will make full use of the resources, such as technology, talents, and information, to build a green environmental protection industry in Leizhou, which will contribute to the economic and social development of the city.

Huang Liandong, mayor of Leizhou, said that the cooperation between the two sides not only benefits Wanhua's development, but will also be of important practical significance for Leizhou to implement green development, optimize its industrial structure, and promote economic development.

In the future, Leizhou will fulfill its responsibilities with preferential policies and good services to promote Wanhua's investment in the construction of a green home industrial park in Leizhou.