"Zhanjiang is a city thriving on the sea with a favorable environment. Its beauty shouldn't be dimmed by our existence," said Ao Aiguo, deputy general manager of Baosteel Zhanjiang Iron & Steel.

The company has already lived up to its word.

The integrated steel production complex in southeastern Guangdong province has been dedicated to environmental protection since it began operations in September 2015. The green concept has run through its whole production process.

Built by Baosteel, one of China's largest steel manufacturers based in Shanghai, the base is tasked with eliminating outdated capacity and optimizing its industrial structure in response to the national strategy.

Therefore, it has set an ambitious goal of becoming the world's most efficient green production base for carbon steel.

The development was approved by the National Development and Reform Commission on May 24, 2012.

Thanks to the strong support provided by the Zhanjiang government, it just took three years to complete the basic construction of the project, with the No 1 blast furnace built in 2013 and No 2 in 2016 on Donghai Island.

In 2018, the base produced 8.39 million tons of molten iron and 8.62 million tons of commercial billets, which brought 39.06 billion yuan ($5.68 billion) in revenue with a year-on-year increase of 15.6 percent. Its net profit hit 4.21 billion yuan, turning the project into an example in the domestic iron and steel industry on how to develop more environmentally friendly and sustainably with higher quality and higher efficiency.

With the ever-increasing production capacity, Baosteel Zhanjiang not only meets the demand for various types of steel in Guangdong, but also supplies auto makers and home appliance manufacturers in South China. Its products are also used in Yangjiang's offshore wind power farm, the Shenzhen-Zhongshan Corridor sea channel, and other major projects.

Construction of the No 3 blast furnace got underway on March 29 and is now in full swing.

However, what is most important is that the entire production process will be completely smart and clean. 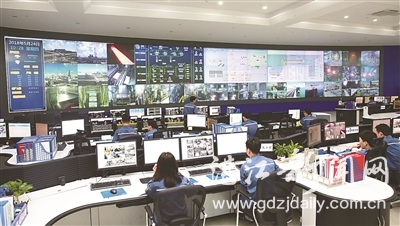 Baosteel Zhanjiang is China's first modernized iron and steel enterprise to comply with the ultra-low emission standard set by the Ministry of Ecology and Environment.

In 2017, the base added the #1550 cold-rolled steel production line, as well as waste heat boilers to optimize process control and improve the efficiency of environmental protection facilities without increasing pollution. The top-level of clean production is therefore maintained.

According to a manager, the No 1 and No 2 blast furnace systems have adopted 116 mature and reliable energy-saving and environmental protection technologies, with an investment of more than 6.5 billion yuan. Their comprehensive utilization rates of solid waste and secondary resources lead the industry, while the emission indexes are well above environmental assessment standards.

It is estimated that after three blast furnaces are all put into operation, the new emissions of particulate matter, sulfur dioxide, and nitrogen oxides will be reduced by 31.7 percent, 56.9 percent, and 88.6 percent respectively than originally planned. The discharge of chemical oxygen demand, ammonia nitrogen, and wastewater will realize "zero growth." Other advanced technologies are used to enable 100 percent reuse of iron-containing dust.

The corporate philosophy of pursing "simple, efficient, low cost, and high quality" solutions has guided Baosteel Zhanjiang to being a leading steelmaker in the country.

As Baosteel Zhanjiang continues to expand production, Donghai Island has been built into an international demonstration clean and green “industrial park,” with energy as the carrier. In the "park," there is a production operation and dispatching center developed by the company. It is equipped with environmental monitoring management and secondary resource management systems, which are aimed at centralized control of production, energy, and environmental protection.

According to a person in charge, pollutants generated and discharged in the plant can be monitored in real time through data collection and editing, information storage and inquiry, as well as statistics and analysis. 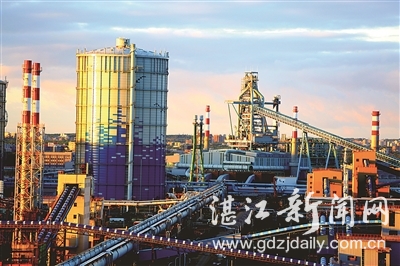 Win-win development based on long-term vision

Deeply rooted in Zhanjiang, Baosteel Zhanjiang spreads across the Southeast Asian market to meet the demand for medium and high-end steel products at home and abroad. Also in Donghai Island, the Sino-Kuwait refinery and petrochemical project adopts a "high-end and fine" development strategy, filling the gaps in the domestic chemical industry. Not far from them is what will become the third largest integrated production base of BASF.

Under this context, mutually beneficial relationships replace vicious competition. "In fact, some of our energy-producing products can be used as raw materials for Sino-Kuwait and BASF projects, and some of their intermediate products can be used on our processing lines," said Ao.

The cluster of important industrial projects, which are new growth drivers of Zhanjiang's economy, poses no threat to the local environment. Reports show that the air quality in the city has remained in the top three in Guangdong province for many years, and is often at first place.

In the future, Baosteel Zhanjiang will shoulder more responsibility for green and clean production, as well as strive to become the most advanced, most efficient, and most competitive green steel plant, helping Baosteel to become a leader in the steel industry, Ao said.