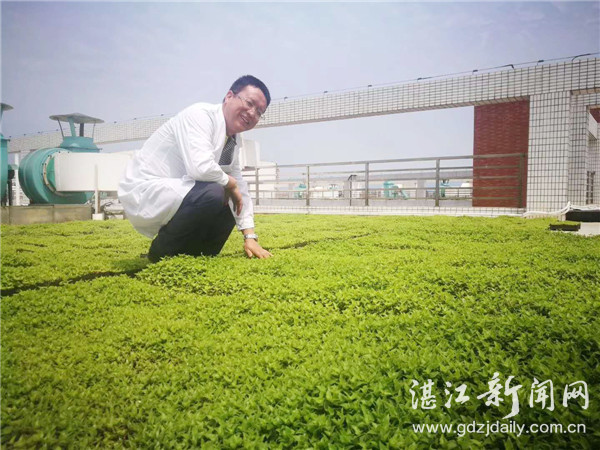 Liu Jinxiang, professor at Lingnan Normal University in Zhanjiang, Guangdong province, poses for a photo with the grasses he planted on the roof of a teaching building at the university. [Photo/www.gdzjdaily.com.cn]

Liu said that reasonable development and utilization of the roof space of the city's skyscrapers can not only improve the ecological environment, as well as conserve energy and reduce emission, but also beautify the urban landscape.

He spent six years on the research and has grown a carpet of green grasses on the roof of the No.4 teaching building at the university. The lawn can now survive for up to 200 days without watering, fertilizing, and pruning. Even though the lawn becomes withered and yellow in the winter, it will grow again in the spring. It can absorb and conserve water in rainy days, as well as help lower the temperature of the roof in hot weather. More importantly, it will not leave root hair and mud on the floor of the roof. It will also not cause problems such as water leakage. In addition, the cost is low and the maintenance is easy.

Due to Liu and his team's continuous efforts to improve this green roof technology, it has gained 26 patents. They have also registered a brand for the technology. In the future, they are going to write a book about the research and application of this technology, which has gained support from Guangdong Publishing Fund.

The technology is being applied in Zhanjiang to help the city develop into a national demonstration city for environment protection and low-carbon development.

Liu expressed hope that the technology will be widely applied and truly make a contribution to the city's ecological and low-carbon development, as green roofs will become a new way to increase the green coverage in the congested city. 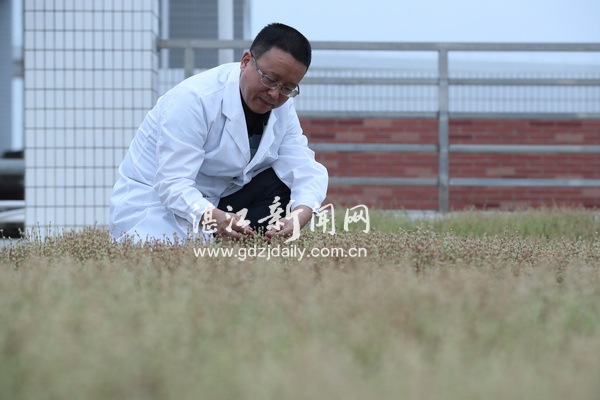 Professor Liu Jinxiang observes the growth condition of the grass at the roof. [Photo by Lin Shizhan/gdzjdaily.com.cn]