Datang Thermal Power Plant in Leizhou, Zhanjiang finished a key step in assembling its second generator set on May 24.

The rotor of the No 2 turbine generator was successfully assembled into the stator, which is a key step to buckle the cylinder. The THDF125/67 type of turbine generator, made by the Shanghai Electric Group, has a rotor of 13.837 meters in length and 90 tons in weight.

The power plant project team has convened a series of symposiums before the assembling with participating units, supervision companies, and equipment factories to make a detailed working plan. They also invited experts to evaluate the project.

The project has started construction since October 2015 and by the end of March this year, 82 percent of the total work had been completed. The two generator sets will go into operation later this year.

When the two generator sets go into operation, they will achieve an annual output value of over 3 billion yuan ($434 million) and contribute at least 300 million yuan in taxes. 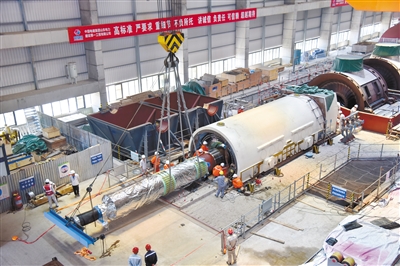