Zhanjiang, a coastal city in the southwest of Guangdong province, will rely on its advantages in location, resources and industries to integrate with the development of the Guangdong-Hong Kong-Macao Greater Bay Area, according to senior officials of the city.

Jiang Jianjun, mayor of Zhanjiang, recently told the media that Zhanjiang has an important role to play in connecting the Greater Bay Area and its neighboring areas.

An outline for the development and planning of the Guangdong-Hong Kong-Macao Greater Bay Area, which was approved by the State Council in February, highlighted the coordinated development between the Greater Bay Area and the city cluster along the Beibu Gulf.

"As a pivotal city of the 21st Century Maritime Silk Road, Zhanjiang is right at the convergence of the Greater Bay Area, the Beibu Gulf Economic Zone and Hainan Pilot Free Trade Zone," Jiang said.

"Therefore it can play a crucial role in the coordinated growth of the three regions," the mayor added.

Already a comprehensive national hub of transportation, Zhanjiang will further improve its transportation facilities to better serve the Greater Bay Area and neighboring regions, according to Jiang.

The mayor said Zhanjiang will own the only 400,000-metric-ton harbor in South China after upgrading the existing port facilities.

The city is now implementing a project to further upgrade and expand the harbor, aiming to better serve the international trade demands from the Greater Bay Area and neighboring regions.

Jiang said four high-speed railways that will link the Greater Bay Area, the Beibu Gulf region and Hainan free trade zone are under construction in Zhanjiang, which are expected to significantly improve regional connectivity upon completion.

The mayor said the development plan for the Greater Bay Area also involves the transfer of resources and industry and Zhanjiang is ready to accept such a transfer.

For instance, Zhanjiang will use the innovation and technology resources from the Greater Bay Area to further enhance its advantageous industries.

Jiang said Zhangjiang is cooperating with higher-learning and research institutions as well as tech companies to upgrade its marine industries.

"One project is the development of a national-level marine science laboratory in Zhanjiang," Jiang said, adding that a number of similar projects are expected to speed up Zhanjiang's efforts in building a national demonstration city in marine economy.

The mayor added that Zhanjiang plans to attract more professionals and entrepreneurs from the Greater Bay Area with a favorable work and business environment.

"We are endeavoring to develop an administrative service system according to international practices and norms so that businesses and professionals can enjoy a stable, fair and transparent environment here in Zhanjiang," Jiang said, explaining that the government is deepening regulatory reforms that aim to offer efficient, tailored services to businesses.

The mayor noted that Zhanjiang is also stepping up the development of a modern agriculture with local characteristics to meet the Greater Bay Area's demand for high-quality farming products and seafood.

Zheng Renhao, Party secretary of Zhanjiang, said the city should make use of the opportunities of the Greater Bay Area and Beibu Gulf city cluster development to boost local advantageous industries such as steel, petrochemicals, papermaking, offshore oil exploration, modern agriculture and marine science, making it a hub for the 21st Century Maritime Silk Road. 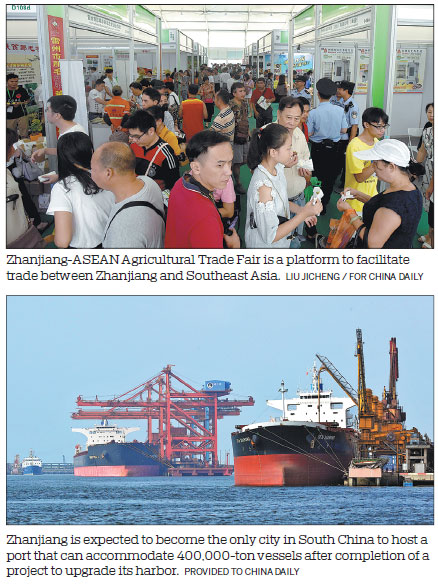