Home> What They Say

Overseas and domestic companies are increasingly seeing the coastal city of Zhanjiang as a prime emerging investment destination - given its abundant marine resources and improving transportation infrastructure, according to leading businessmen.

On Donghai Island in southeastern Zhanjiang, about 40 kilometers from downtown, German chemical leader BASF will invest a total of $10 billion to build a chemicals production site, the single biggest investment project it has ever made internationally.

According to an agreement signed in July this year, it will ultimately be the third-largest BASF site worldwide, after its Ludwigshafen facility in Germany and its production site in the the Belgian city of Antwerp, when it is completed around the year 2030. 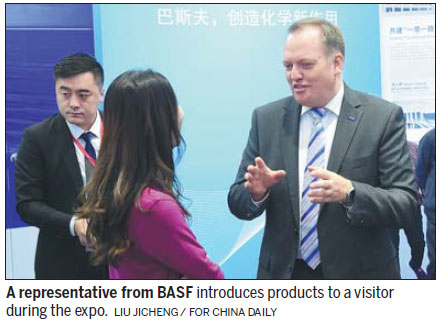 As a result, the chemicals giant exhibited for the first time at the China Marine Economy Expo, or CMEE, which ran Nov 22-25 in Zhanjiang, Guangdong province, to showcase solutions for the sustainability of the city's marine economy as well as a range of innovations designed to enhance the quality of life of its people.

China has a far-reaching impact on the future development of the world economy, and Guangdong province has always been the pioneer of China's innovative development," said Zheng Daqing, BASF's senior vice-president for China's market and business development, during the show.

"Here in Zhanjiang, we see the start of the Maritime Silk Road and it is China's window to the world," Zheng noted, adding that their presence in the market could help in leveraging the ocean resources, and in protecting people, cities and coastal infrastructure from risks. The company displayed a series of innovative products at the expo, including a utility pole that is made of a composite materials that can improve wind resistance by 2.5 fold while the weight is nearly one fourth that of traditional poles.

"The poles can withstand severe weather conditions such as typhoons, snow and other natural disasters," Zheng said.

Also during the expo, China Merchants Group, a State-owned conglomerate headquartered in Hong Kong, announced it had kicked off construction of its international cruise terminal complex on Friday, which on completion will include a cruise terminal, shopping malls and apartments.

It's the first project since the group signed a comprehensive strategic cooperative agreement with Zhanjiang municipal government last July. The cruise terminal alone will cost about 784 million yuan ($112.8 million) - with a capacity for 500,000 passengers a year - and is expected to be put into trial operations in 2021, China News Service reported.

Wang Hong, deputy general manager of the group, said the project will nurture the headquarters economy on trade in Zhanjiang and enhance interconnections between Zhanjiang with surrounding cities, Belt and Road countries and regions and even the rest of the world.

CP Food, a subsidiary of CP Group, a transnational based in Bangkok which has the agroindustry and food sector as one of its core businesses, also plans to increase its investments in the city, said Sun Xiaowei, head of its Zhanjiang operations.

He said his company would invest a total 1 billion yuan to build a slaughterhouse and chicken processing plant.

The first phase, which was put into operation last year, is able to slaughter 30 million broilers and process 70,000 tons of chicken products a year, according to Sun.

The plan to build two breeding chicken farms and expand the hatchery in the near future so that the production capacity can reach new levels," he said.

He noted that with the improving transportation facilities - widely extended highways, rails and the new international airport under construction, the market of Zhanjiang increasingly has the potential to reach the Guangdong-Hong Kong-Macao Greater Bay Area, southern China and even southwestern China.