The upcoming China Marine Economy Expo in Zhanjiang, Guangdong province will feature several companies that have pledged massive investments in the city, such as German chemical giant BASF, which plans to invest $10 billion in a fi ne chemical project.

Overseas Chinese Town Group, which plans to invest 50 billion yuan ($7.2 billion) in tourism facilities in Zhanjiang, and Fantawild Holdings Inc, which will invest 3 billion yuan in a theme park in the city, will also stage booths at the expo, said Mao Cheng, a deputy chief of the Guangdong Provincial Culture and Tourism Department, at a news conference in Guangzhou earlier this month.

China Merchants Group, which signed a comprehensive strategic cooperative agreement with Zhanjiang city government last year and is committed to developing an international cruise port in the city, serves as one of the co-organizers of the expo. 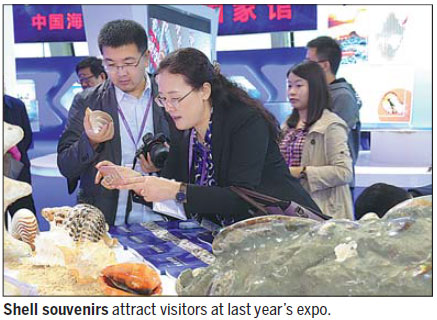 It will showcase its major business units and organize some of the forums during the expo, said Han Dong, the South China general manager of China Merchants Shekou Industrial Zone Holdings Co.

Most of the projects highlighted in the strategic cooperative agreement reached between China Shipbuilding Industry Corp and the Guangdong provincial government in April this year are located in Zhanjiang, said Zhang Mingqian, director of the reform office of the corporation, which is one of the co-organizing parties of the expo. Exhibitors at the expo will also include China National Offshore Oil Corporation, China Communications Construction Co and China General Nuclear Power Corp.

Co-hosted by the Ministry of Natural Resources and the Guangdong provincial government, CMEE will be held in the port city from Nov 22 to 25.

The expo will feature national pavilions, industrial and offshore show areas, a tourism and cultural area and a merchandise sale area.

More than 60 vessels of various kinds will be on show during the expo, with Chinese navy ship open days also being arranged, according to the organizer.

Major indexes of China's marine economy will be issued at the main forum, which will be addressed by heavyweights such as Yin Zhongqing, deputy director of the Financial and Economic Affairs Committee of the National People's Congress, and Wu Yousheng, academician of the Chinese Academy of Engineering.

The German-Chinese Business Association, the Federation of Chamber of Commerce and Industry Sri Lanka and the Vietnam Chamber of Commerce and Industry are joining the expo, with exhibitors, buyers and professionals from 54 countries also having registered. More than 3,200 exhibitors from 63 countries and regions - including Australia, the United Kingdom, Norway, Canada and Thailand - attended the last session of the annual expo.

A total of 11,000 firms from 83 countries and regions attended the expo, clinching trade deals worth more than 200 billion yuan since the expo was first staged in 2012.