Bee-eaters gather to roost in Leizhou 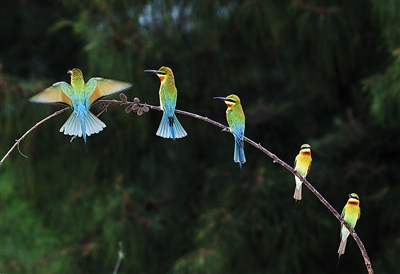 Bee-eaters are unique for their richly colored feathers. [Photo/Zhanjiang Daily]

Groups of bee-eaters, often hailed as "the most beautiful bird in China", are currently residing in Tianchengtai Resort, Leizhou Peninsula, attracting dozens of bird lovers and photographers from all over the country on a daily basis.

The bee-eater is a rare species of bird found mainly in Southeast Asia and characterized by its richly colored feathers. As its name suggests, it primarily eats bees, wasps, butterflies, dragonflies, and other flying insects.

The species is a monogamous bird. After successfully mating, the husband and wife will build a nest and stay together for years to raise their chicks. Thus, many places regard the bee-eater as a symbol of love and loyalty, calling it the "love bird".

Due to the lush natural environment and improved environmental protection measures in Leizhou, Tianchengtai Resort has become an ideal habitat for bee-eaters. A large number of them have come here to breed from mid-April to late June every year since 2014.

According to a member of the Zhanjiang Bird Watching Society, there are two kinds of bee-eaters that can be seen at Tianchengtai Resort -- the blue-tailed bee-eater and the blue-throated bee-eater. The latter is rarely seen in China.