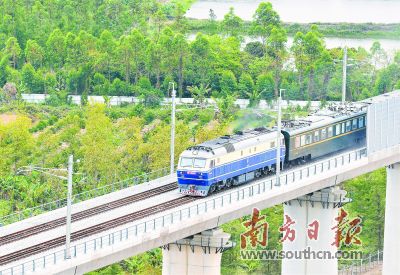 A section of the Shenzhen-Zhanjiang Railway which links Jiangmen with Zhanjiang completed construction and entered the testing stage on April 14, moving one step closer to its official opening at the end of June.

The conditions of the railway track, roadbed, bridges and tunnels were all subject to inspection, while power supply, telecommunication, signal and customer service systems will also be tested to make sure that they are ready to begin routine operations.

The Jiangmen-Zhanjiang section, which stretches 355 kilometers through Jiangmen, Yangjiang, Maoming and Zhanjiang, is the most convenient rail line connecting western Guangdong with the south-central Pearl River Delta.

It is not only essential to the completion of the Guangdong railway network, but will also contribute to the coordinated development between different areas of the province.