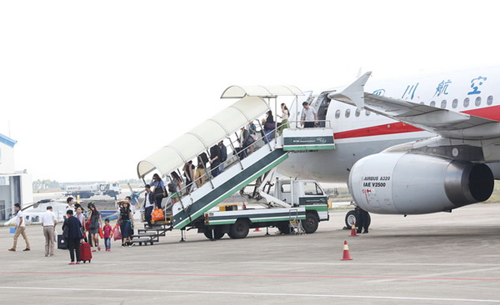 The recently announced summer-autumn timetable at Zhanjiang Airport has listed more flights to seven cities and two new destinations between the dates of March 25 and Oct 27. A total of 472 flights will leave the airport for 31 cities across the world weekly.

Operated by Shenzhen Airlines, the newly launched Wenzhou-Huizhou-Zhanjiang air route is scheduled to run daily. China Express flights which commute between Zhanjiang and Meixian, are slated to fly every Tuesday, Thursday, Saturday and Sunday. Flights to Fuzhou and Guilin have, however, been canceled.

In the meantime, the number of fights to Bangkok, capital of Thailand, and Phnom Penh, capital of Cambodia, has been increased from two to three weekly. The former is available on Tuesdays, Fridays and Sundays, while the latter is slated for Mondays, Thursdays and Saturdays.

According to the new timetable, there are also up to six China Express flights bound for Chongqing and five China Eastern Airlines flights going to Chengdu. Tianjin Airlines has tightened its schedule with four trips to Changsha as well as eight to Haikou.

Passengers heading for Jieyang Chaoshan International Airport now have more travel options with the beginning of the new aviation season. They can make their pick from the nine Tianjin Airlines flights or five Spring Airlines that are arranged on Tuesdays, Thursdays, Fridays, Saturdays and Sundays.

Furthermore, multiple airlines have offer discounted tickets recently. For example, the lowest prices (excluding tax) for a Zhuhai, Chongqing and Guiyang trip will be 200 yuan ($31.7), 320 yuan and 270 yuan respectively.