Two Zhanjiang roads to be upgraded for growing traffic 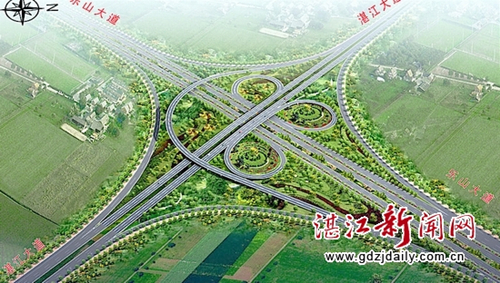 A rendering of Zhanjiang Avenue which runs across Leshan Avenue.[Photo/gdzjdaily.com.cn]

The expansion of Zhanjiang Avenue (Haixi Express Line) and Shugang Highway is scheduled to begin in March, part of the city's efforts to increase its traffic handling capability, it was announced by the Zhanjiang Highway Bureau on Feb 27.

Zhanjiang Avenue, which starts from Baoman town in Xiashan district, stretches about 21.9 kilometers to meet the National Highway 325 (G325) in Mazhang district. It is designed with an eight-lane structure and a speed limit of 80 kilometers per hour.

Adopting a public-private partnership (PPP) model, the project is estimated to entail a total investment of 3 billion yuan ($473.1 million). Currently, preparations for the expansion are already underway, as construction will begin in late March.

With an estimated investment of 576 million yuan, the 20-km Shugang Highway will be upgraded to the first-tier with six lanes at going either direction. Its expansion, which will also kick off in March, is projected to be completed within 18 months.