Thousands of jobs on offer at Zhanjiang job fair 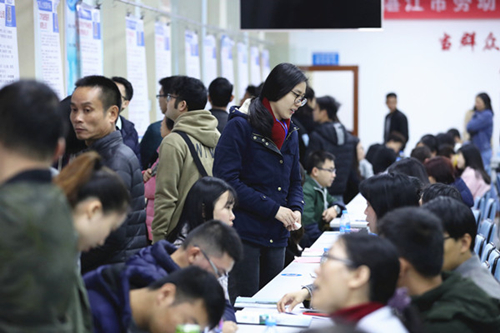 Jobseekers interact with firms at the job fair. [Photo by Lin Shizhan/Zhanjiang Daily]

As the festive atmosphere slowly weans off, Zhanjiang's job markets once again gear up for the upcoming year. The Zhanjiang Human Resources and Social Security Bureau organized a large-scale job fair on Feb 23, which had around 150 attending companies.

More than 7,000 posts in real estate, logistics, aquaculture, finance, catering, e-commerce, marketing and machinery were offered to local job hunters. Brochures were handed out to the budding jobseekers to help them learn more about their potential employers.

Beyond that, the bureau also set up multiple booths at the fair to provide information about policies, laws and regulations and subsidies tailored for college graduates and people with employment difficulties.

To make it more effective and productive, a match-making conference was launched in advance. More recruitment fairs in different forms will be organized in the future to further stimulate the job market, according to an official of the bureau.